This article is my attempt to document my experimental render graph project, called graphene. Graphene is still in flux, and I do not have a crystal clear roadmap ahead of me, only loose goals. It is scary to publish something when I don’t have the full picture yet. However, documentation is best written fresh, so I will write what comes to mind now, and edit later if required. I might write more articles later if I have more to talk about. Here’s what I have so far:

What is a render graph?

You can think of the process of rendering as a bipartite graph. This means that there are two sets of things, and an element of one set can only be connected to an element of the other. Build systems can also be thought of as bipartite graphs, as explained in The Success and Failure of Ninja by Evan Martin. 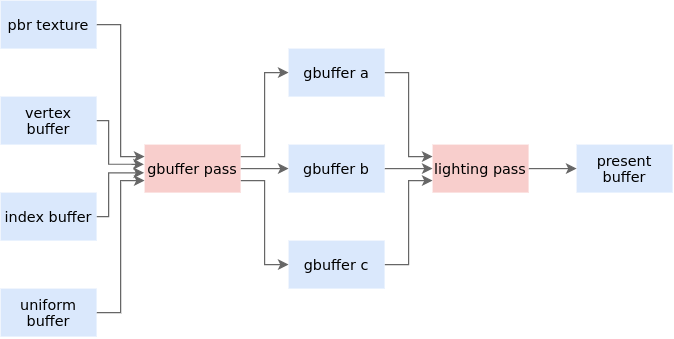 In the case of rendering, the two sets are resources and passes. Passes represent execution of shaders, with a given pipeline state. Pipeline state is things like blend modes, depth testing, viewport, etc. Passes consume and produce resources, which are buffers or images.

This is basically a render graph.

I think it’s interesting to develop an API around this abstraction. I’m far from the first person looking at this problem, FrameGraph: Extensible Rendering Architecture in Frostbite [Video, Slides] by Yuriy O’Donnell. Halcyon + Vulkan [PDF] by Graham Wihlidal. Unreal Engine RDG 101. but I have a few personal goals in mind:

Now let’s have a look at some specifics:

There is a fundamental tension between graphics developers, and newer GPU APIs like Vulkan, Metal or DirectX 12:

The APIs want to front-load everything. Every aspect of pipeline state—which images to render to, which buffers to consume, whether the depth test is enabled, whether blending is enabled, which shaders to execute—all should be declared up-front. At run-time, you can avoid expensive validation checks, and dispatch to the GPU as fast as possible.

Graphics developers (although I can’t speak for everyone) want to specify logic in the render loop. That way, they can toggle effects individually for gameplay or debug visualization.

Thus, loosely speaking, APIs want to be retained mode, but graphics developers want to be immediate mode. Render graphs are a good way to resolve this tension.

There are three steps to working with a render graph:

The Unreal Engine 4 graph API looks roughly like this:

Here, the dispatches are lambdas. When the user calls graph.execute(), each pass begins, its lambda is called, and then it ends.

Lambdas tend to play fast and loose with lifetimes. In C++ you basically assume that the captured state is valid and accessible in the lambda. Rust is much stricter, and this style of API gets too hairy.

Instead, I’ve found that this tends to work a lot better:

There are no lambdas here. Code runs in the same order that it’s written in, and lifetimes become very straightforward.

Let’s look at the anatomy of a frame in this API:

Side-note: I had an idea of using Rust’s async/await features to build a render graph. Since that feature also internally builds a directed graph, there is some semantic overlap. I asked around, and found out that there already was a working implementation of this idea! rendertoy by Tomasz Stachowiak. After going through the code, I decided that the complexity of async/await wasn’t worth it for me, for this project.

My API is not without its demerits, though: Each pass has to be declared once, and then invoked once. This is a little extra boilerplate. Probably most painfully, it requires that the passes be declared and invoked in the same order, but does nothing to enforce this at compile-time. If you have any thoughts, please get in touch.

Going forward I want to implement the following features. I might have something to say about them later: